Looked at solely from a software design perspective, the Volkswagen architecture for undermining emissions testing is really quite clever. VW’s so-called ‘defeat device’ knows that the car is being tested and puts the engine into cheat mode. After the test, the car ‘realizes’ it’s safe to return to its normal state. True, environmental agencies may be fuming, so to speak, at being tricked, but the software has been successful. If you ask your average motorist if they would rather help stop global warming or save money on gas, my guess is that they’d choose the latter. The practical almost always triumphs over the ideal.

This tactic wasn’t just implemented by some rogue designer. Higher-ups in the business must have known what was being done and must have weighed the positives with the negatives. The positive: They could sell more cars by advertising better mileage and fuel efficiency. The negative: They could be found out and have to face the consequences. Someone must have decided it was worth the financial risk. Some sort of safety net, such as a healthy insurance policy, must have been put in place to protect the company in the event that their ploy was discovered. Although uninstalling the defeat device involves nothing more than a software upgrade and, as such, wouldn’t cost much, the result of the reflash of the cars computer or ECU (engine control unit) would be either cars that would not be able to pass emission tests or cars that did not perform as well as they used to. In order for these cars to pass an emissions test and have any resale value at all, a more extensive, and expensive, engine design will be necessary.

Passing emission tests is why VW came up with the defeat device idea in the first place. When VW found that some of their diesel models could not pass the emission tests in certain U.S. states, they decided to find a cheaper way around the problem than redesigning the engine. Some, in fact, say it is impossible for a diesel car to pass these emission tests without bulky emission control devices. The outcome of implementing the defeat device was that VW sold more diesel cars in the U.S. than any other manufacturer. The defeat device did what it was supposed to do. It made the company money.

But what about other manufacturers? Why don’t they use defeat devices? Actually, in the past, some have. Using some ploy to circumvent emission tests is nothing new. Back in 1995, for example, GM was fined $11 million for installing defeat devices on Cadillacs. The company also had to spend $25 million on fixing the problem on vehicles it had already sold and another $9 million to develop technology to fix the problem. Overall, the EPA has won 14 court cases against manufacturers who tried to get around emission tests. In other words, the existence of some sort of defeat device has been known for years. In 2007, the government made defeat devices, known as O2 Simulators, illegal in a settlement against Casper Electronics. That may be, but I found something suspiciously similar still for sale by Casper online, even though it was listed as unavailable. I’m not a car mechanic, but their Oxygen Sensor Simulator seems to do, or could be programmed to do, the same things as the original O2 simulator. If the Casper device is not for sale, other company’s devices are. The incentive to circumvent emissions tests in Europe seems to be related to the stiffer emission standards enacted in 2009, as can be seen in the following chart.

Gap between real-world CO2 tests and lab tests in Europe 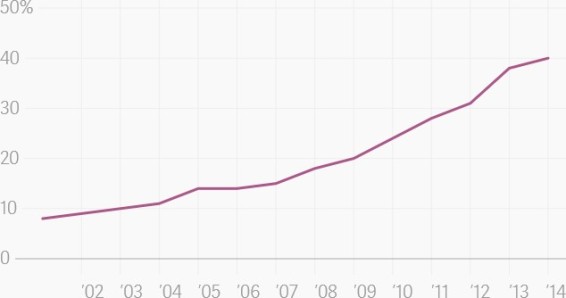 The advertisements for these simulators carry the warning that “some parts are not legal for sale or use in California on any pollution-controlled motor vehicles”. One must then ask what vehicles don’t have pollution controls. Other online sellers soberly state that you should only use these simulators in off-road vehicles. Sure. In any event, if someone really wants an O2 simulator, they can still be found. There are other products sold as ‘tuning kits’ which, according to some forums, can be tweaked to spoof emission control tests.

But that’s not even the end of the story. At a past Def Con, Aaron Higbee showed how you can undermine emission testing with a laptop hack. You can buy the equipment for this for around $100. Most people who want to reflash (take control of) their car’s ECU want to get a more powerful vehicle. The reflash gives them control over the car’s operating parameters. Clearly, if you can bypass emission control devices, you can get more power. Thus, beating emission control tests is more a byproduct of the reflash than the goal of it. 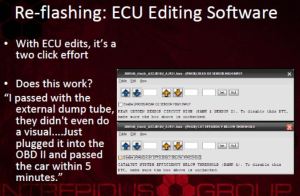 Reflashing your car’s firmware is not easy and is not without risks. There are companies that specialize in back-engineering ECUs and they can charge thousands of dollars for their services. However, some websites will keep its users informed about what reflashes are available for which models. If beating emissions testing is your goal, there are a number of ways to do this.  Others have made similar observations. VW just took this a step farther by doing the hack for you.

One key result of the VW cheat is that emissions testing will become more comprehensive and may even involve real road tests. This will inevitably increase the price of emission tests. That’s not such a big deal if you have a good income, but, for those in lower income brackets, the tests may become a financial burden to be avoided. At some point, more drivers will begin looking for ways to circumvent the tests to save money. As the demand for software hacks increases, a need for those who can install them will also arise. The chance of making some good money may tempt tech savvy individuals into taking the risk of installing ECU hacks. As long as they offer this software hack at a reasonable price, business should be good. Oddly enough, the results of more comprehensive emissions testing may end up being counter productive. Making emissions testing more comprehensive may, in fact, increase the amount of dangerous emissions.