Every new upgrade in technology has come with romantic implications. No doubt, as soon as enough people bought cars back in the 1920s, the Lover’s Lane concept arose. And who’s to say how much thanks the baby boom generation needs to give for the development of the drive-in movie. And shortly after the internet came into being, the first dating sites appeared. Match.com, for example, began in 1995. Today, there are estimated to be more than 8,000 dating sites covering all possible niches, from dating for people who are cat lovers to dating for people who have the same allergy or who like the same kind of salad. With the growing interest in virtual reality (VR), and with the arrival of Sony in the VR arena in the next few weeks, we can certainly expect that this new technology will have an impact on the world of romance.

But to begin with, why do we need virtual reality at all? What’s wrong with reality? Besides, what’s the goal behind all of this? Do we someday want to have VR that is so good we can’t distinguish it from reality? Wouldn’t that be confusing?  I mean, how would we then know which universe we were in. Reality would be negated.

A better description of virtual reality would be augmented or refined reality. Our brain doesn’t need detailed reality to deduce that something we see is real. It fills in the blanks. Magicians and optical illusions fool our brain by taking advantage of this programming error. For example, the picture below is a still image, but for some reason, your brain wants to make it move, and there’s not much you can do about it. 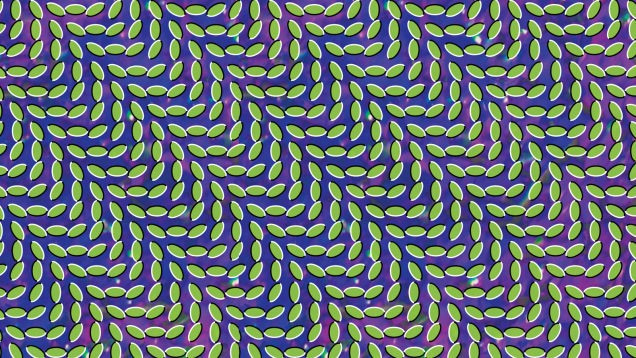 And if you don’t think people interpret virtual reality as reality, just watch some people experiencing it.

Long before anyone could ever conceive of a computer, books took us to imaginary words through the use of symbols (letters), and the brains of readers decoded those symbols to create their own imaginary world. Romance scammers take advantage of the natural creativity of the human brain to create, through emails and chat rooms, the semblance of a romance when all they really care about is the person’s wallet. So what will VR offer those seeking romance? What is the ultimate underlying goal that is being pursued here?

As you are reading this, tech entrepreneurs all over the world are working on ways to incorporate VR romance into their games, apps, or dating sites. For the moment, it seems that the Japanese are leading the way, at least if the technology on display at Tokyo Game Show 2016 is any indication. Gaming site, IGN, had Miranda Sanchez check out a few of many VR romance games on display. Some were like novels that a player could participate in by making certain choices in the immersive VR world. One that she played, Suwa-don VR, placed her in an elevator where a handsome anime character started flirting with her and then moved in close, causing her to leave the game in a state of embarrassment. In another, Warring States VR, she met the famous historical character, Oda Nobunaga, who touched her shoulder and patted her head, and, even though she could not feel this, it gave her a calming sensation that made her feel that she could have played this historically based game a little longer. In the Puzzle of Empires demo she was placed in a luxurious Roman bath with a woman known as Augustus. Augustus was dressed in a towel, for modesty, but the experience still left her feeling uncomfortable. Finally, she met a schoolgirl in her room in Summer Lesson and began developing a friendly relationship with her.

The main point to extract from all this is that these games produced memorable experiences just as real world experiences would. Other ideas being developed will allow users to create avatars of themselves and interact with the avatars of real people in a VR environment that they can move around in. You could, for example, meet someone on a beach, in the mountains, in Paris, or even on Mars, if that was your idea of a romantic date. But why stop there? You could have a romance in Vienna in 1890. Yes, time travel would be possible in VR, but that’s a topic for another day.

At this time, however, the characters you meet or become will be cartoonish or Sim-like. Some developers are suggesting a full body scan to have your character more closely represent who you really are, but for now, the technology and cost of this would be beyond the range of most people. The key phrase here is, ‘for now’. There are already facial ‘masks’ that can interpret and transfer your facial expressions to your romantic partner. Your gestures and movements can be captured and expressed by your avatar. Sure, your avatar may not look much like you, but, then again, maybe you don’t really want to look like the person you are.

When Miranda Sanchez was asked how she would like it if she could actually feel the head pat she remarked “Oh no! That would be awful! That would be too much.” But that’s exactly what VR designers have in mind. Ideally, they would like full sensual emersion, that is, the ability to transmit input from all of the senses to complete the VR experience. They would like everything that you feel, hear, taste, and smell transferred to another person. And if you think this is something in the scientific future, think again.

Back in 2013, researchers reported the development of a “haptic interface for mediated intimacy” called, XOXO, which could be used for transmitting hugs and kisses over the internet.

The digitalizing of touch can be extended to any part of the body. Here you can use your own imagination. At least that’s what some visitors to Tokyo Game Show did when they were told they could interact with an anime female through a mannequin torso. In fact, they interacted a little too well and the show’s management had to put a stop to it.

The senses of taste and smell have also been digitalized, albeit in a rather simple form. The Digital Taste Interface takes the form of a lollipop. If, for example, a character in a video game (or your avatar) stops for a pizza, the game can transfer a digital signal to the lollipop held in the player’s mouth that will mimic the taste of pizza. Smell is an entirely different matter because the receptors in the nose must interact with particular molecules in the air. The interaction is converted to an electrical signal which is sent to the brain for interpretation. David Cheok is working on this problem by trying to bypass the receivers to stimulate smell signals produced by the olfactory lobe.

Certainly we are in the infancy of haptic transmission, but, like all things that seem technologically impossible, we can’t dismiss the possibility that someday a complete sensual experience can be shared with a partner in a distant part of the world. The experience could be so compelling that it may prove to be preferable to a real world experience. In addition, there is no reason why a person couldn’t record the experience and place it in a library. Later, they could ‘relive’ the experience at any time they wanted. That’s one way that VR can be superior to reality.

One of the drawbacks to VR romance is that it may prevent real world meetings of VR partners. This is much the same as what now happens in online encounters. According to a Pew Research study, although 66% of people who meet online will eventually meet their online partners, only 5% of those surveyed say that their marriage or long-term relationships began with an online date. In other words, something went wrong in these meetings. Another study found that “47% of men and 27% of women have encountered a first date who looked nothing like their dating profile image.” That’s because people tend to, perhaps not surprisingly, try to enhance how they appear in their online profiles. So, if VR meetings become highly satisfying and realistic, why risk ruining the relationship with a real world meeting?

But maybe you don’t need to interact with a real person at all. Maybe you can create your own perfect partner. This could be done by using a self-learning neural network. Once you create the physical features in an avatar that you want as a partner, this avatar, powered by neural net feedback loops, will begin to learn your preferences through the interactions you have with it. By learning your likes and dislikes, you will eventually create your perfect partner… and who would want to leave a perfect partner.

Thus, the major drawback of virtual reality would be in, at least spatially, isolating individuals. There is also the strong possibility of people becoming so addicted to the virtual world that they have no desire to leave it. Why come back from a vacation if you don’t have to? But there are other dangers lurking in the virtual world as well.

It is possible that your date with your perfect partner could be accompanied by an invisible presence, aka, a hacker. This hacker could or could not choose to materialize as an avatar in your romantic location. No doubt Nigerian romance scammers will be knocking each other down trying to get their hands on VR technology and join every dating site that has it. Of course, they will look nothing like their avatar and will always be running into all kinds of problems that require their partners to send them money. Nothing can stop these miscreants from recording your interactions and using them to extort money from you later. In short, VR will make scams more believable.

I believe that VR will be a major technological milestone. I suspect that most homes will eventually have a VR room or area. We will see many YouTube clips of people who have harmed themselves, broken things, or even had heart attacks while experiencing it. Social mores will be disrupted. Psychological problems will be linked to VR, but, in the final analysis, nothing will stop us all from walking down this enticing  road that promises to take us away from the humdrum routine of the real world.