They met on Facebook and, instantly, she knew that Charlie was the love of her life. They shared so many things. They were both religious and would often pray together during their online encounters. They both could not wait until the day they could meet in person and finally get married.

Charlie, however, was in the construction business. He always had jobs to finish before he would be free to meet her. One day Charlie needed a little money to finish a construction job. He asked her for a loan of $30,000 that he promised to repay in one or two days. “I thought about it long and hard. I prayed about it. I’ve always been a very giving person, and I figured if I had money … I could send him some [money]. And he promised to have it back within 24 to 48 hours. I thought, ‘I could do that.’ It was kind of a statement of faith, too.” So she sent Charlie the money. There was no answer from Charlie and no repayment. But when he did finally respond, it was to ask for an additional $30,000. And guess what? She sent him the money. And so it went for over two years until she had given Charlie over $2 million.

I know what you’re thinking. How could anyone be so stupid? The answer is easy. It’s called, denial. When in denial, a person, when faced with a fact that is too uncomfortable to accept, rejects it instead, insisting that it is not true despite what may be overwhelming evidence. As the woman admitted in her interview with the FBI, “part of me thinks that he’s going to come through and pay me back what he owes me and, you know, swoop in here, be the knight in shining armor.” But then, seeming to recognize the source of her denial, she states, “I can’t even imagine a man, a person, that could be this bad. So, I think of him—I can’t think of him that way. My mind keeps me from thinking of him that way because there can’t be a man in this world that could be this horrible to have purposefully done what he’s done to me.” Sadly, there are men and women like this. They could care less about what happens to their victims as long as they get money. They are master manipulators and, although women over 40 tend to be the main victims, men are not exempt, as the graph below shows. 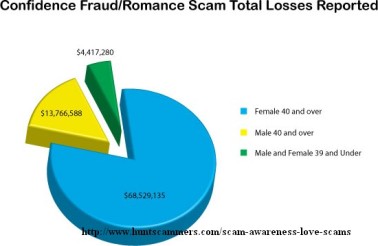 We are no longer talking about the old-school romance scam attacks, where people are contacted through random emails (“I saw your profile online”). Nowadays, organized crime groups single out likely targets and team up to scam them. In 2016, a dating scam syndicate, comprised of 13 people and operating out of Malaysia, was busted. The scammers ran their operation like a business. “Half of the core members were responsible for using computers to create fake identities, and searching for and contacting victims, while the other half handled crime proceeds and remitted the money out of Hong Kong and other countries.” They netted over $7 million by scamming mostly women, primarily from Hong Kong and SE Asia. The police could not track down the money because they had laundered it through over 10 banks. According to the Romance Scams Now website, over 90% of scams are conducted by scammer teams, not individuals. Here is a kind of organizational chart of such gangs that I modified from the website to show how their infrastructure works. 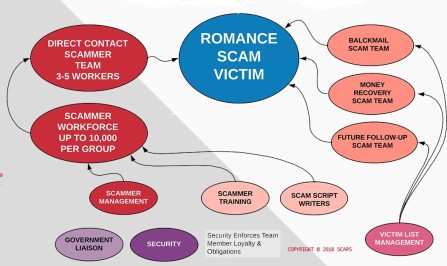 Scammers still use dating sites, but they have gotten better at using a compendium of information from social media sites as well. Many women are scammed via Facebook. Often, these scammers claim a connection to one of the victim’s friends to begin the scam and gain the victim’s confidence. They try to match the victim’s profile to gain trust. If the woman is single with a child, they are also single with a child. If the woman is religious, they, too, are religious. The more a dating site caters to a specific demographic, the easier it is to gain the victim’s confidence. For example, scammers are now targeting Christian dating sites and Muslim meeting sites. As one writer puts it, “con artists may target users in religious dating websites because they see them as ‘easier targets’ for two reasons: the first is that they follow Christian values of kindness and service to others, and scammers know how to tug at those heartstrings.” Is nothing sacred? Well, to scammers, no.

If you look at the left side of the romance scam organizational chart shown above, you will see that many people are employed in manipulating or grooming the victim into a state of dependency and submissiveness. Once they gain the victim’s trust, often demonstrated through the first transmission of money to the scammer, the scammer is in a position to use them for more nefarious tasks. Knowing that the victim will do anything to keep the relationship alive, the scammers will have victims do more than just send them money. For example, the scammer may tell the victim it is finally time for them to meet. Of course, this is what the victim has been dreaming of. The catch is that she/he will need to take a trip to another city to pick up some important documents before completing the final leg of the flight. The unusual request means nothing at this stage of the relationship, as the victim will do anything to finally meet their soulmate.

This is precisely what happened to New Zealand grandmother, Sharon Armstrong. “I was not aware of the grooming that was occurring nor some of the warning signs, I now recognize and understand.” 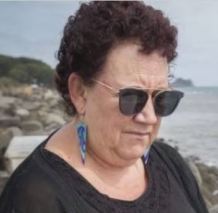 Sharon picked up a suitcase that her online lover, Frank, had asked her to retrieve in Brazil, while she was on her way to their meeting in Europe. Almost the minute she did so, she was arrested by the Brazilian police. The suitcase had a million dollars of cocaine hidden inside it. Sharon spent over two years in prison for the offence and cost her family $100,000 in legal fees. Even after being arrested, Sharon, for some time, believed Frank was still waiting for her.

If you think that this upgraded romance scam is a one-off event, think again. Psychologist Dr Peter Schaapveld, who specializes in romance scams, states that “reliable research has indicated that 20 per cent of inmates in jails worldwide for drug mule offences are women and in most cases they are victims of romance scams.” Just last December, a naïve Australian grandmother was sentenced to death in Malaysia for drug smuggling. She was also the victim of a romance scam. As the judge in the trial noted, “I believe that at that time her feelings of love towards ‘Captain Daniel Smith’ overcame everything, including her own husband, her family and her future.”

I’ve written previously about how romance scammers were turning their victims into money mules; basically, making them launder money in order to keep their relationships going. But now, it looks like international drug cartels are putting in a massive effort to use romance scams to groom victims to do their dirty work. In such cases, they don’t need to spend the time and money on grooming a woman only to find out later that she had no money. They could still manipulate her emotions and use her to further their criminal operations.

The Better Business Bureau recently issued a warning in the face of the current sharp rise in romance scams. They reported that “victims in the US and Canada have reported losing nearly $1 billion over the last three years – and BBB suspects this is only the tip of the iceberg, Victims rarely speak out because they are humiliated and embarrassed that they have fallen for a scammer” Some live in fear of reprisal. In fact, it is said that only between 5% to 15% of scam victims come forward. Drug cartels take advantage of this and realize they can use these people without fear of being caught. As long as romance scam victims live in denial and shame, romance scams will continue to flourish and, in the process destroy countless lives. Love hurts.