China is in the process of changing from a producer-based economy to a consumer-based economy. But, among college-age students, this switch occurred years ago. In an effort to achieve status by possessing high-priced technology or luxury items, Chinese students have been taking out high-interest loans from online lending sites, often, with no intention of repaying them. In one BBC interview, a student explains how he went into debt buying an iPhone, and, when unable to repay it, took out a loan from another lending site, and then another, and another, until he had a $3000 debt. He had no intention of ever repaying the loans and did not worry about the consequences. He felt that the companies lacked the will or ability to track him down and force him to pay.

It’s quite likely that this student and others like him are simply naïve. The broadcast claims that suicides have occurred among students who got into too much debt. One student is reported to have stolen the identities of 28 of his classmates to take out more loans, but when his debt reached $90,000 and he realized that he could never repay it, he took his own life.

Lenders are beginning to react to the fact that students who take out loans may never intend to repay them. In order to get a loan, students are required to give their parent’s address and send a photo of themselves holding their Chinese identification cards. Thus, the lenders have the potential to make both the lenders and their parent’s lives miserable.

So how do these lending sites work. First of all, the sites really only exist as a meeting place for potential lenders to meet borrowers. Lenders join these so-called P2P lending platforms to make money by cashing in on the difference between the interest on regular loans and the loans they offer desperate students. If, for example, they are able to secure a loan at 10% and lend the money from it at 25%, they can make quite a profit. The sites make money on keeping a percentage of each transaction. These sites are supposed to make sure that the loans are repaid. However, if the P2P sites do not pay enough for enforcement of the repayment, the lenders can lose money. This is what happened on one popular site, Jiedaibao. Lenders figured out that they could get away with not paying back loans and the lenders lost a lot of money. Jiedaibao ended up being sued and the Chinese government ended up putting stricter regulations on P2P lending services.

As one can expect in a youth culture nursed on the idea of getting rich quick, the new regulations did little to stem the interest in P2P loans and the status that can be purchased using them. The only thing the new regulations really accomplished was to cause an avalanche of bankruptcies among online lenders which, in turn, saw investors lose millions of dollars. The number of lending sites fell from 6000 at the beginning of 2018 to 1200 by the end of the year. The number is expected to fall further in 2019 and reach about 300 by the end of this year. In fact, just today (July 19) one of the biggest P2P lenders, Lufax, reported that it would close its P2P lending section, citing prohibitive government regulations. Yet, despite all of this, the demand for loans remains high.

A few years ago, many online lenders used the idea of having female students, who wanted loans, send a naked photo as collateral. The idea was that none of these students would risk the exposure of these photos to friends and family and, thus, repay the loans. When this didn’t work, the lenders would require more explicit photos, videos, or having the borrower work for the sex industry in return for either loan repayment or extending the repayment period. Even if the lender didn’t repay, the company could make money by selling the acquired material to porn sites. The company could then use its limited loan enforcement group to focus on men who refused to repay loans.

The Chinese government would like the world to believe that such practices have been eliminated by recent regulations. However, others report that it has simply been forced underground and is still being used. Why else would Wuhan University develop an app that would protect students from loan sharks? In addition, many Chinese P2P lending firms have been forced to relocate to other nearby countries, such as Vietnam and India, to bypass Chinese government regulations. It wouldn’t be a stretch to assume that they will continue using the same lending practices that worked in China.

Now, you may think this is only a problem in China. This certainly couldn’t happen in the U.S., right? Maybe, but the infrastructure for such a loan strategy has already been set in place. This infrastructure is in the form of payday lenders. Payday lenders give short-term loans at exorbitant interest rates to people who run short of funds before their next pay check. According to one source, there are now far more payday lenders than McDonald’s Restaurants in the U.S.

Add to this the fact that one in three college students use payday loan services and you have the potential for some of these lenders to use more novel methods to guarantee the repayment of their 400% interest loans. 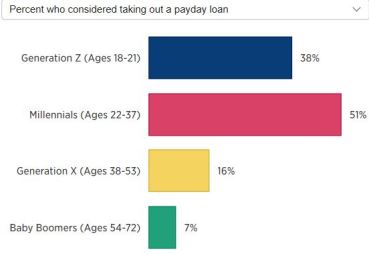 Payday lenders will often guarantee repayment by requiring borrowers to give them access to their bank accounts. They will withdraw money when no payment is made and are not shy about overdrawing on an account. They will also harass borrowers in any number of ways. It is also not unknown for desperate female students to turn to sex work when confronted with debt. In other words, the groundwork is prepared for payday lenders to link the two. In this environment, it may be just a matter of time for online lenders in the U.S. and other countries to use the Chinese model to insure repayment. It’s something to keep an eye on.